Cello’s best friend is a Great Dane named, “Grady.” Great Danes are among the largest dogs in the world, and Grady was one of the biggest Great Danes around.

When Grady was a puppy, he was very small. He would run and play with all the other puppies, frolicking about without a care in the world. Just like his friends, Grady began to grow, and grow, and grow. Soon his friends stopped growing. First the Terriers and Poodles, then the Shepherds and Collies, and finally the Saint Bernards and Labradors all stopped growing, but Grady did not. Pretty soon, he was a giant dog, too big for many of the games and fun his friends played. He couldn’t sit on people’s laps or squeeze under fences, and his sad puppy dog eyes were too high to meet a person’s at just the right angle. This made Grady one sad, giant, puppy dog. 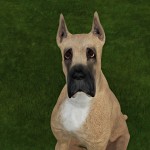 Then one day Grady saw a man approaching, unlike any he’d ever seen. This man was tall, very, very tall. He had giant hands for petting, giant feet for walking long strides, and a giant lap to sit in. Grady approached him cautiously, trying to make himself as small as he could, and gave the man his best puppy dog eyes and begging pose.

“Well, aren’t you a handsome fellow!” remarked the man.

Grady pressed his head against the man’s giant hand hunting for a patting.

“Do you want to come home with me, boy? It sure seems like you do. Let’s find your owner, and see if I can take you with me.”

And that’s the story of how Grady, the biggest dog in the village, came to live with Cello, and how Cello made Grady feel small again.