One Too Many Apple Pies 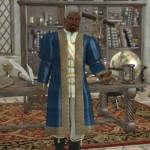 When Mayor Marlon Mayweather ran for his first term he found himself a bit in over his head during the final weeks of the campaign. During a late summer appearance at the County Fair, Marlon told the crowd he’d never met an apple pie he didn’t like. His opponent, Milford Dixon, heard about this and hatched a plot to sabotage the future mayor’s chances.

On the Sunday before election day Marlon was invited to judge an apple pie competition. He thought there would only be a dozen or so pies to judge since the village isn’t very big. However, Miford secretly invited bakers from neighboring villages by promising a generous prize for the winner.

Pie after pie was brought before Marlon to taste. Minutes turned into hours as he ate forkful after forkful of the delicious desserts. Late into the evening, the never-ending line of pies kept coming. Not wanting to disappoint the crowd of potential voters, Marlon kept trying pies. Those closest to the candidate could see he was in trouble and begged him to stop.

“I promised to judge this competition, and I always keep my promises,” he responded as another pie was placed before him.

Around midnight, one last pie was set down on the table in front of him. Marlon was sweating at this point; his hand trembled as he lifted the final bite to his mouth. The crowd waited in hushed silence as he chewed. And chewed. And chewed. Everyone wondered if he could swallow that last bite.

“So, Mayweather. You promised to judge the entries. Who won?” he asked, convinced Marlon was going to hurl all over the table. Marlon now knew why there were so many pies. Milford had tried to make him look bad.

“I did,” he smiled weakly and promptly passed out.

Sure enough, on election day everyone remembered Marlon’s endurance and commitment. He won in a landslide. He still presides over an annual apple pie competition each year to commemorate the event, but he leaves the judging to others. After all, he still can’t decide which one was his favorite.